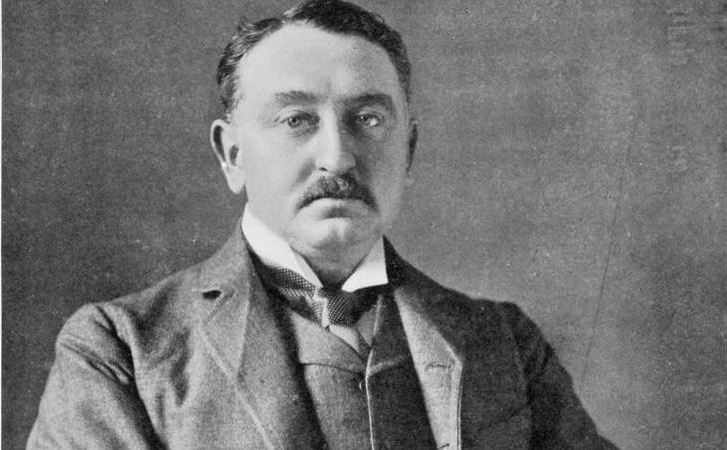 British Imperial Fascist Corporatism on the march through history. 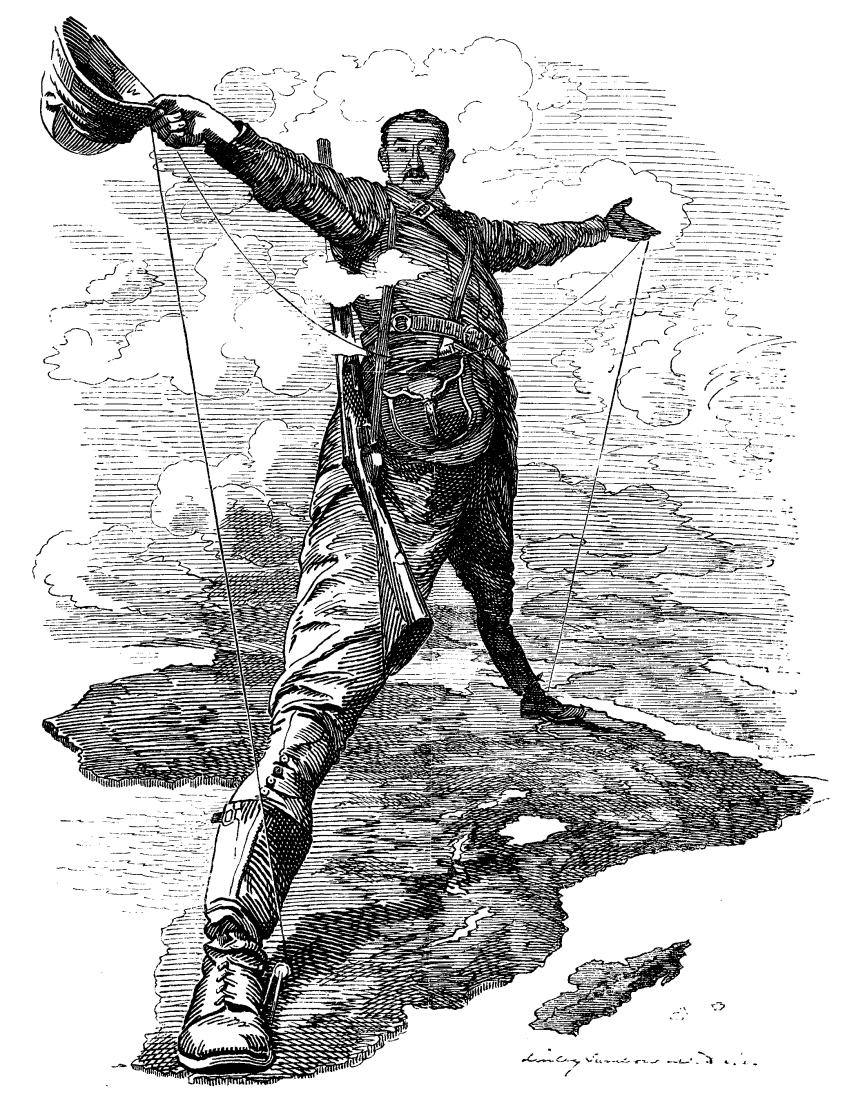 Cecil Rhodes Was a Member of the Privy Council

OUTRAGEOUS CONSPIRACY OF OMISSION: Cecil John Rhodes was appointed to Queen Victoria’s Privy Council on Feb. 02, 1895 and rocketed immediately to lead the Council – all before he began raping and pillaging South African diamonds and gold… for the Queen

Buried in histories of Great Britain is the fact that Cecil J. Rhodes was a LEADING member of Queen Victoria’s Privy Council along with Lord Rosebery who played such a formative role in the Pilgrims Society (1909), Empire Press Union (1909) and the formation of MI6, MI5 and GC&CS renamed GCHQ in 1946 from delegate newspapermen from the Empire.

This omission proves a conspiracy among historians and the Pilgrims Society to buy them off and suppress unflattering truths about their hegemony… that continues to this very day.

Here’s proof of his membership : 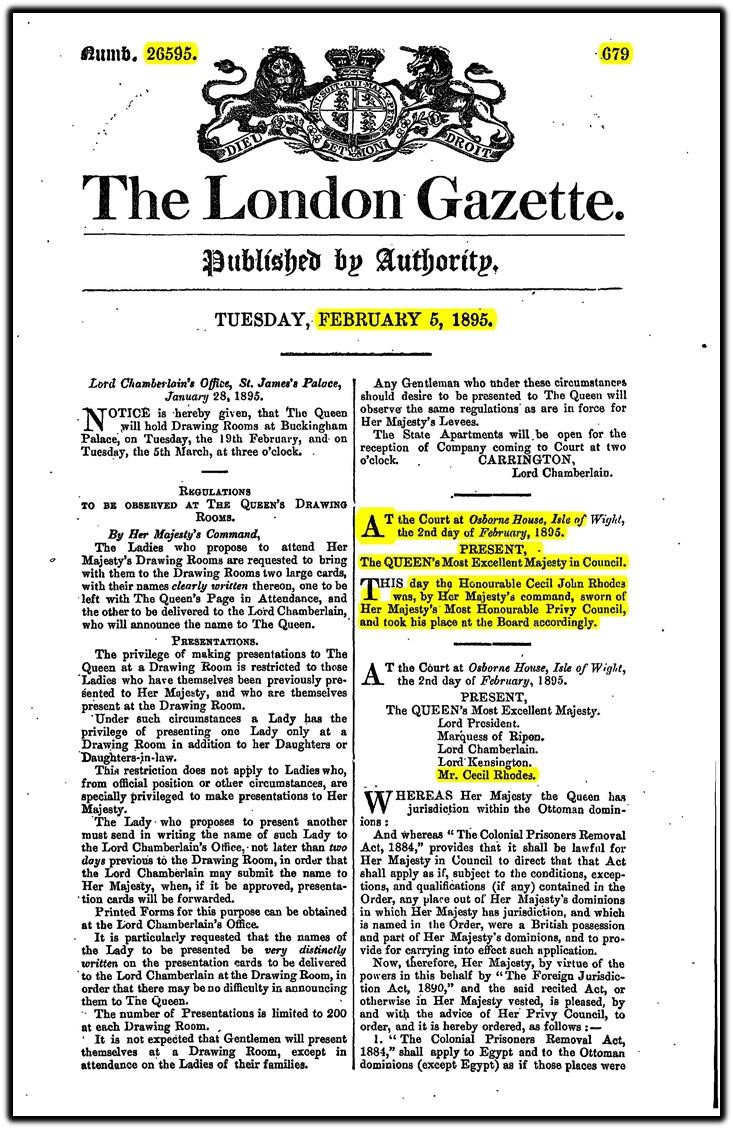 Members of the Queen’s Privy Council Advisors mentioned on this page:

Lord President, Archibald Primrose, 5th Earl of Rosebery. https://en.wikipedia.org/wiki/Archibald_Primrose,_5th_Earl_of_Rosebery . Lord President of the Council of the United Kingdom (1895). Co-founder of the Pilgrims Society. Organizer of the First Imperial Press Conference, 1909. Co-founder of the Empire Press Union. Co-founder of MI6, MI5 and GC&CS renamed GCHQ in 1946 from delegates of the Imperial Press Conference, 1909. Rosebery was a Liberal Imperialist who favoured strong national defence and imperialism abroad and social reform at home, while being solidly anti-socialist. Historians judge him a failure as foreign minister[2] and as prime minister.

Marquess of Ripen https://en.wikipedia.org/wiki/George_Robinson,_1st_Marquess_of_Ripon . When Gladstone returned to power in 1880 he appointed Ripon Viceroy of India,[11] an office he held until 1884. In Gladstone’s 1886 government he was First Lord of the Admiralty, and in the government of 1892 to 1895 he was Secretary of State for the Colonies. These positions were subsequently held by Winston Churchill and Henry de Worms 1st Baron Pirbright.

Lord [Joseph] Chamberlain https://en.wikipedia.org/wiki/Joseph_Chamberlain . Father of Neville Chamberlain, author of the great appeasement with Adolf Hitler. He had major responsibility for causing the 2nd Boer War (1899–1902) in South Africa and was the government minister most responsible for the war effort, including the concentration camps where over 60,000 blacks and whites died in mass Burroughs Wellcome vaccine experiments, including 14,000 mostly white children

Lord Kensington https://en.wikipedia.org/wiki/William_Edwardes,_4th_Baron_Kensington . He notably served as Comptroller of the Household from 1880 to 1885 and as Captain of the Yeomen of the Guard from 1892 to 1895; under Lord Rosebery became Prime Minister in 1894. Rosebery helped found the Pilgrims Society and was keynote speaker at the First Imperial Press Conference, 1909, and helped form the Empire Press Union followed by MI6, MI5 and GC&CS renamed GCHQ in 1946.

Fake History is DEADLY to all of us on the planet

200-Year Information War. Patriots around the world know the enemy and join together to defeat the one world order beast.

Patriots Expose the 100-Year Anglo-American Propaganda War That Has Terrorized the World with War, Strife, and Poverty