Below are headlines and videos of a few odd events that seem related to us. We are speculating and connecting dots where perhaps there are none, but without a rigorous and honest media to follow these people and their activities, we are left on our own to decipher what we see.

What do you think about these headlines and videos? Do you think the swamp knows that citizens are aware of their crimes against the United States government? .

Watch the video above from the McCain funeral where Huma Abedin rushes by Henry Kissinger like he was a useless dirt bag, headed straight to Lindsay Graham where she whispers in his ear while Gen. Mattis keeps a watch on them from a distance.

What if the urgent message Huma needed to convey from Hillary Clinton to Senator Graham was that he needed to ask Brett Kavanaugh questions about military tribunals in the Senate’s open hearing? Does Hillary need the swamp to hear his answer? 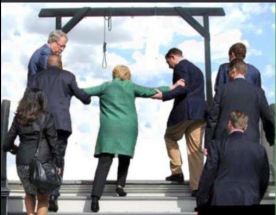 Are the slimy creatures in the swamp getting nervous about all of their crimes being exposed, while, at the same time, their predictive linguistics (think Clif High and his use of this technique for himself and his clients) indicate that the prevailing phrase being used in the internet now is military tribunals!?

Does Hillary need the swamp to know how Kavanaugh will rule on military tribunals for citizens who are domestic enemies? If this is the case, we may see some senators who were going to vote “yes” switch their vote to “no” on Kavanaugh’s appointment.

See Grahams’s questioning of Kavanaugh here. (Sorry for the Qanon garbage on the clip.) Other than that, the media creator did a nice job presenting this information. As you may recall, the original video we had posted on Truth News Headlines was taken off YouTube by Big Brother.

Military Tribunals Coming For The Wicked

Hillary Clinton fights Brett Kavanaugh’s confirmation from the outside

We the People Make Official Charges of 28 Counts of Treason

Educate and enlighten your circle of influence about military tribunals with these pass-around fliers:

The People Respond to the Coup

7 thoughts on “Is the Public Ready for Military Tribunals?”