Tyla and Douglas Gabriel are joined with Michael McKibben to explain how it is now perfectly legal to lie to Congress, or anyone in the U.S. Government..and they can lie to you, too.  Anyone can do it but you have to know what law your are looking for. Learn about the 1996 law they passed while you were “asleep” to make sure that no one goes to jail.

The False Statements Accountability Act (“FSAA”) was sponsored by a one-term freshman Senator William J. Martini (NJ) who later became a federal judge. It included a bizarre Subsection (b) that permits judges, attorneys and parties to lie to Congress, courts and agencies without liability.

Here is the Ninth Circuit Court appeal which affirms that lying is legal:

CONGRESS SANCTIONED LYING TO COURTS AND GOVERNMENT IN 1996

It’s legal to lie in Congress

AIM Patriots: Make sure to get this important information with anyone who is having to deal with CONGRESS and the WITCH HUNT!

They passed it to protect themselves. Use it against them!

AFI (Jun. 10, 2015). Congress sanctioned lying to courts and government in 1996. Americans For Innovation

(This was passed the same day as Chandler’s Federal Trade Secrets and and Economic Espionage Act of 1996… Leader Technologies’ former patent attorney and national security advisor to the Clintons, Bushes and Obama.)

This should be an affirmative defense of all but the last count, seems to me. 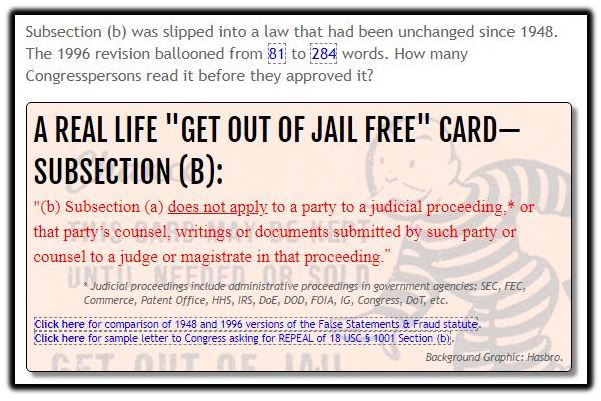 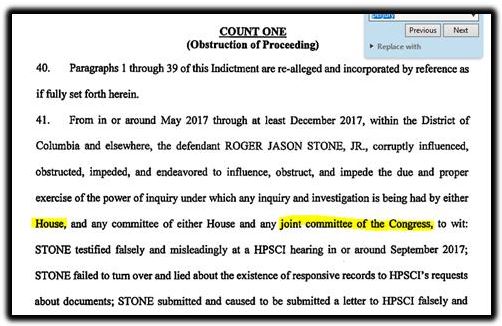 What does this mean, folks?

Congress made it legal to lie. 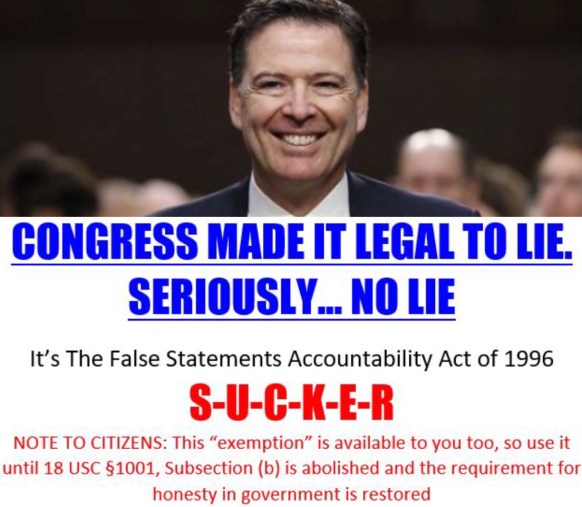 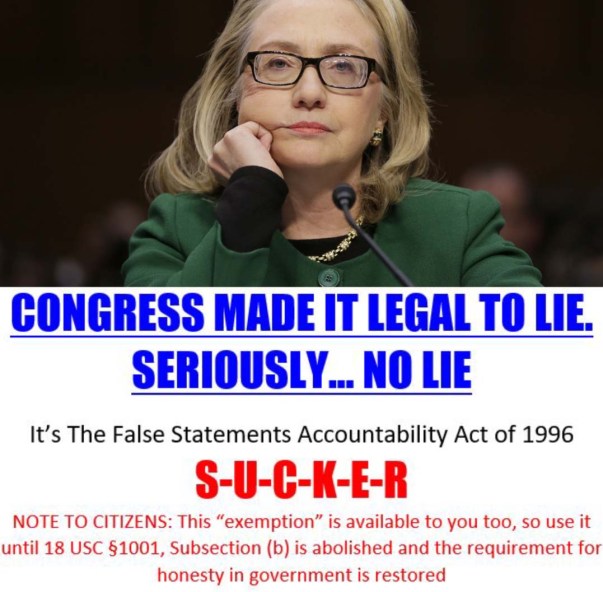 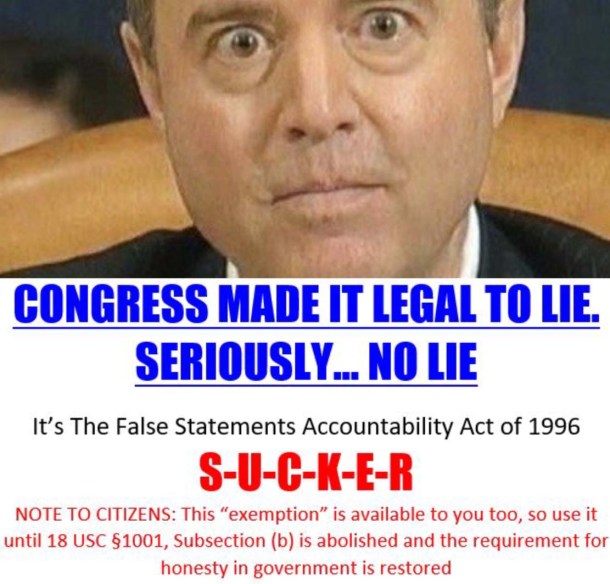 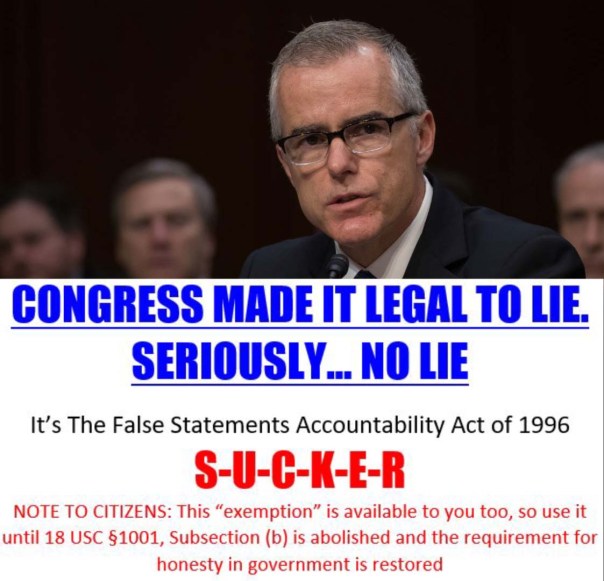 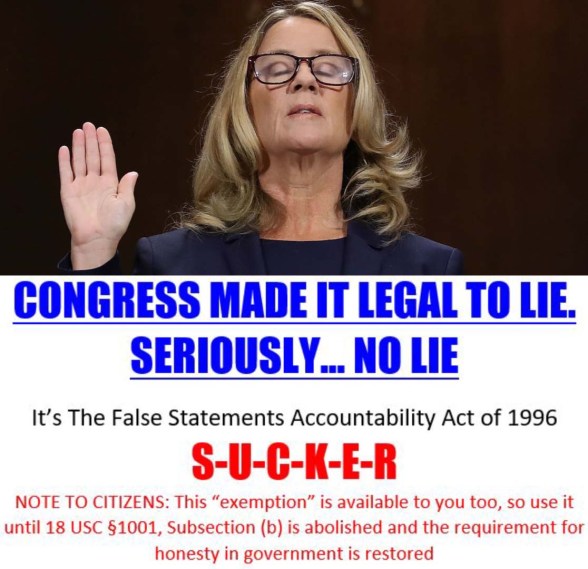 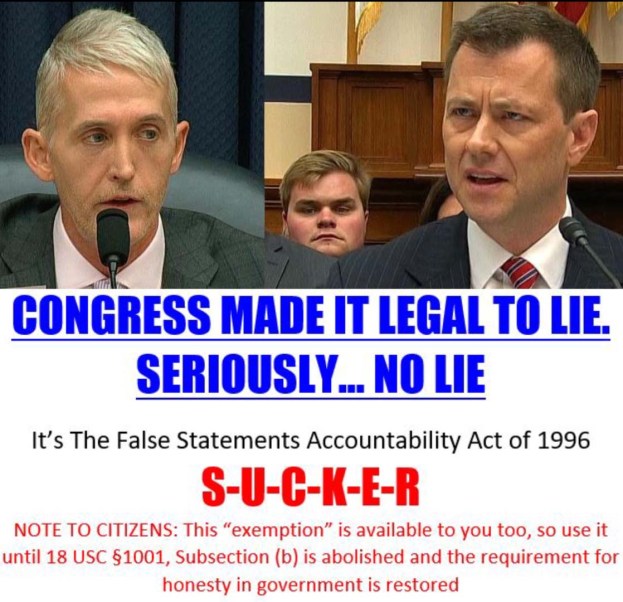 Why didn’t George’s attorney tell him about the lying fine print? Everyone else in the swamp seems to know! 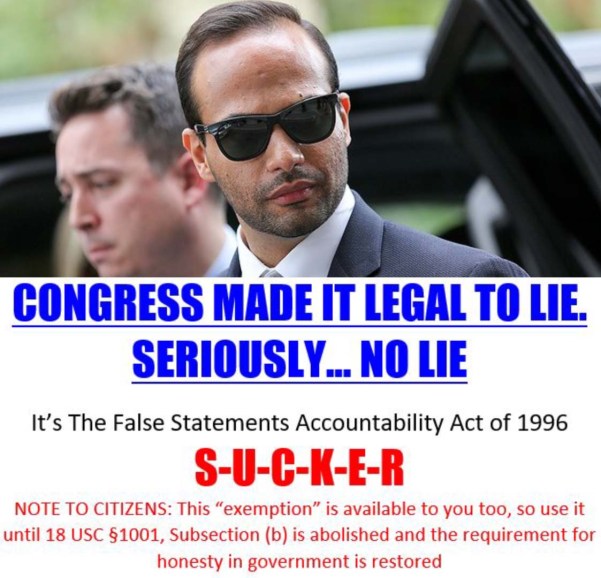 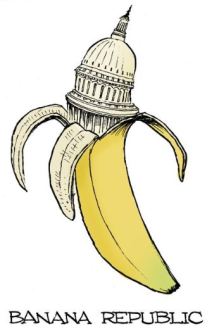 Has anyone told Roger’s attorney? It’s legal to lie to Congress. Works both ways.

You see, once it became legal to lie, Congress, the Courts, and all areas of government that operate under this legal-to-lie law abnegated their purpose under the U.S. Constitution. 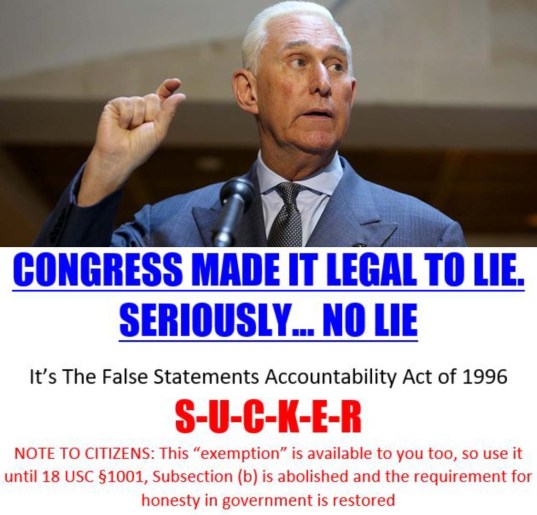 How do we know that William Barr’s testimony was truthful? What about the Mueller WITCH HUNT and all its entrapment lies. But that’s ok because it’s legal to lie in the Den of Vipers. 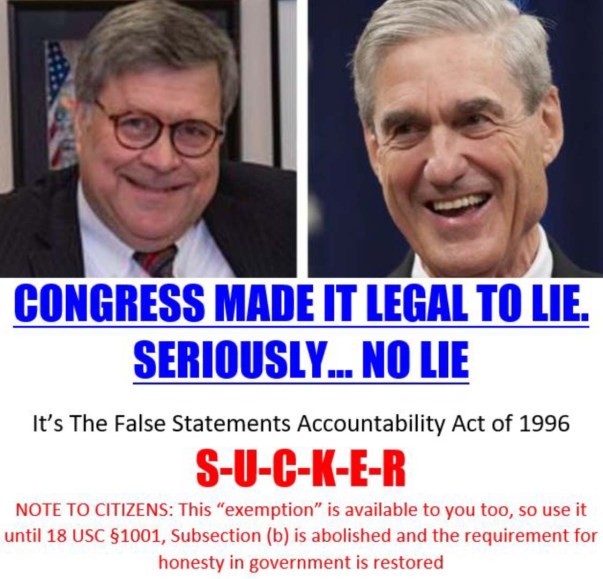 Of course Sundar Pichai can lie, or not…and so can Sheryl Sandberg and Mark Zuckerberg..and the Federal Reserve Chairman and SCOTUS nominees.

Of course, that won’t keep them from answering to God Almighty and their personal karma…but for the here and now, they can lie and not be prosecuted. It is called lawfare. 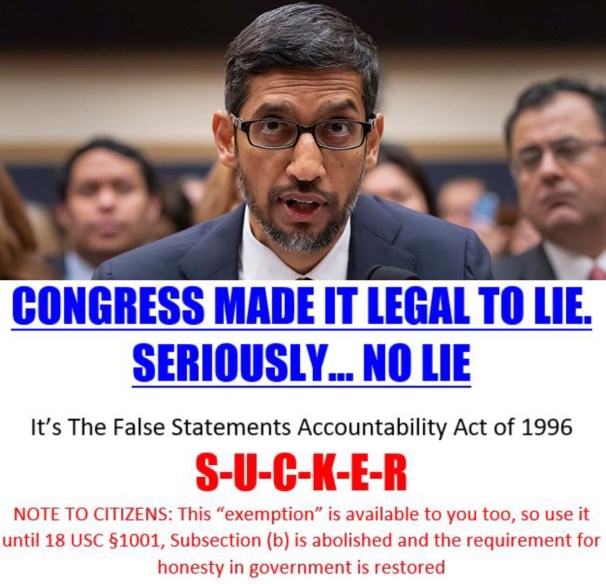 These intel turkey-butts don’t have to tell you the truth about anything. They have national security secrets, classified info, counter intelligence, secret bathroom servers….plus it is legal to lie. And we expect the president to actually get truthful intelligence from these sources? Thank goodness he has the American Intelligence Media. (wink) 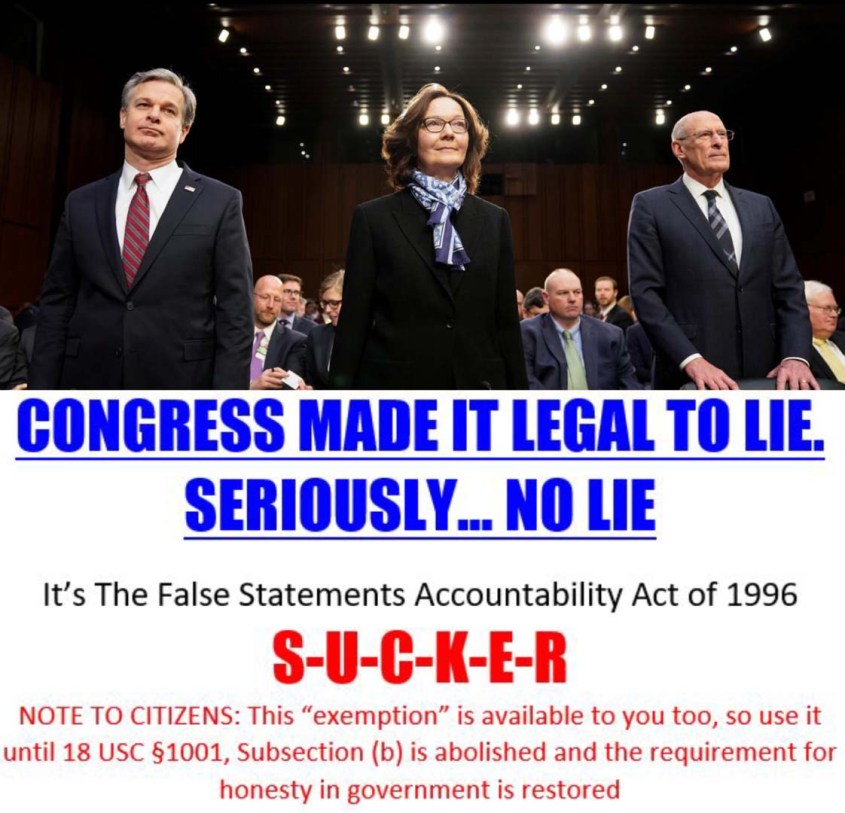 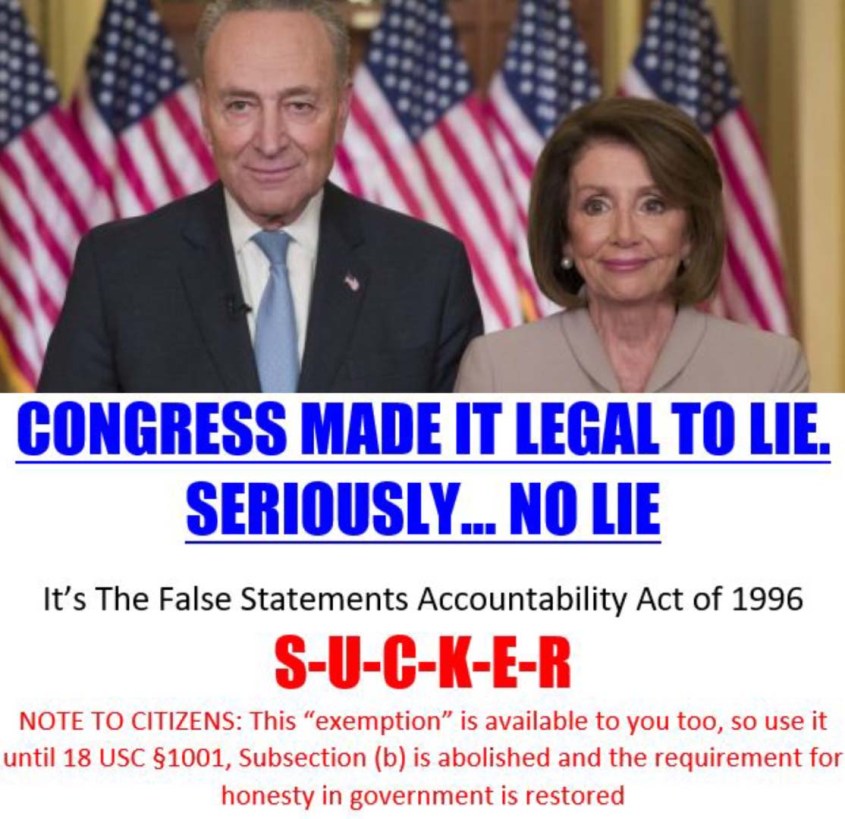 Since 1996, these sub-human bottom-feeders in the swamp have been lying to the American people and the world.  All the while, it was legal. How clever these spawns of Satan are.

Five years before they blew up the World Trade Center, these traitors did a CYA and made it legal to lie about it all. 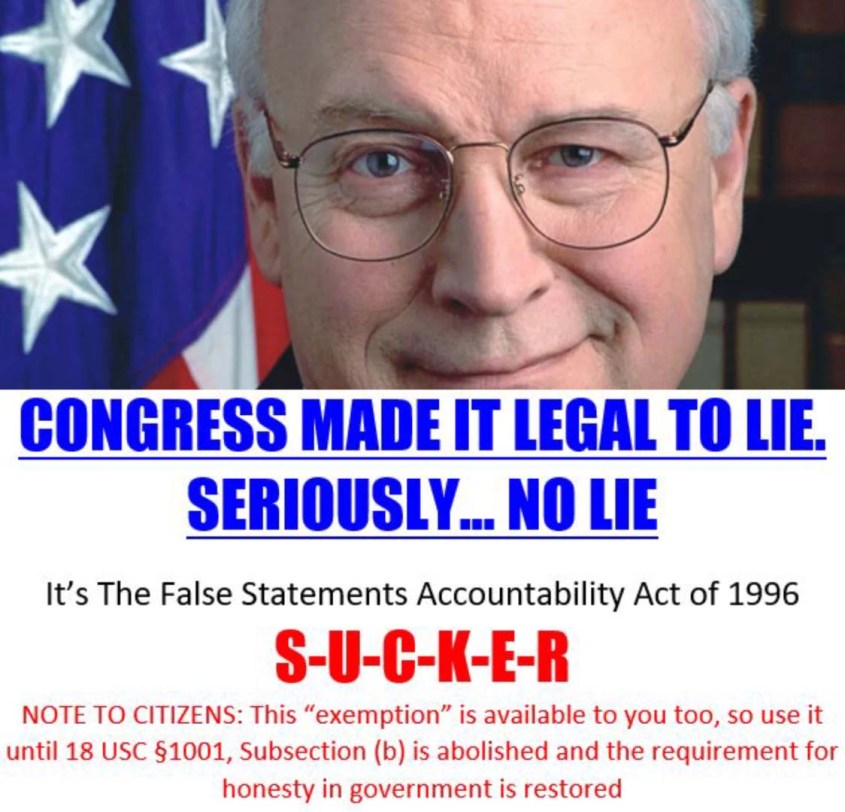 As you watch this video, think about the 100-year war we call The Great Information War. How do you apply classic war strategies in warfare beyond the physical dimension of tanks, soldiers, missiles, and terrain? Today’s battlefield is in a realm of information where the ammunition firing upon patriots are deceit, obfuscation, lawfare, and propaganda.

How can you become a better information warrior after taking the principles you learn from the video below and applying them to what you can do with your talents, skills, resources among your circle of influence?

Remember, we need patriots on all fronts from local initiatives to national movements. Step up and join the worldwide truth movement!

The 33 Strategies of War 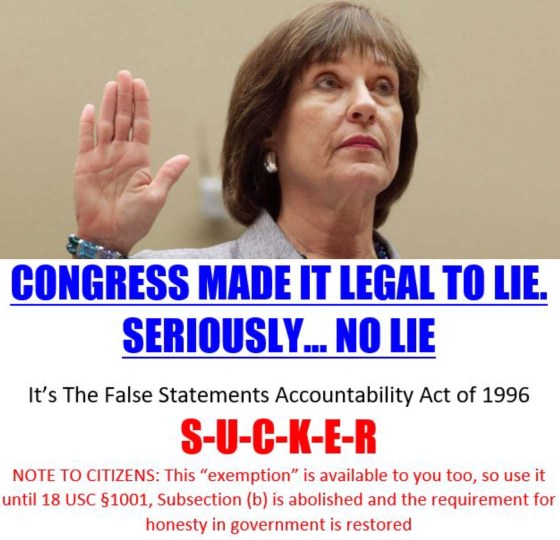 9 thoughts on “It is Legal to Lie to Congress”