Slick propaganda video below (probably originating from Privy Council sources) pointing at China for releasing a manufactured bioweapon on to the world. Fine with us…because after China, we are coming for the Queen’s wealth for her financial and human crimes against the citizens of the United States. It was HER companies where she holds the controlling shares and her government spy operations that were not only the origins of the coup against Donald Trump, but the source of the coronavirus and its release.

And while we are at it, can we clear up that matter about Alison Saunders, at the time the Chief Prosecutor for the Queen, coming over for dinner at Bruce and Nellie Ohr’s home four days before GCHQ chief Robert Hannigan came over to NSA headquarters in Ft. Meade, Maryland to help John Brennan, who was under the supervision of UK spylord Arvinder Sambei, to wiretap Trump Towers, all under the direct supervision of London CIA Chief at the time – Gina Haspel?

If you are reading this blog from the hoity-toity privy closet where the Queen takes her private and protected dumps on the world, citizens of America know your crimes. We collected the evidence in massive amounts of documents and have spread it throughout the four corners of the world.

Stand down, you globalist pigs from the Pilgrims Society, the Privy Council, and the British Imperial Empire. You will never be able to hide from the truth we all know now.

The Emperor, or shall we say Queen, has no clothes.

Jump the big pond and you will find the origins of the coup. Chris Steele was taking orders from Privy Councillors Richard Dearlove and Geoffrey Pattie. Bruce and Nellie Ohr (both SES operatives and crown agents) were taking orders from UK Alison Saunders. Brennan was UK Hannigan’s lapdog.

Truth is now in their court…let’s see what kind of propaganda they send back. 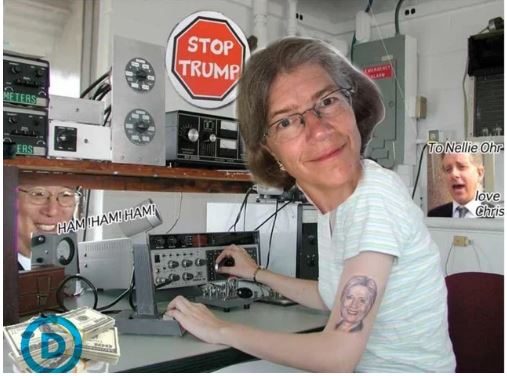 Learn more about this treasonous couple of British crown agents who tried to overthrow Donald Trump on behalf of the British Imperial Empire.

International Espionage, American Treason, and Dinner at the Ohrs’