We are CROWDSOURCING the TRUTH about Bill and Melinda Gates. This page will remain open as we add more research notes at the bottom. You are also welcomed to add your notes in the comment box.

Bill and Melinda Gates died in 2013? You are not going to believe what we have discovered… looks like the Gates deceased in 2013. This is from Ancestry.com and it gives us enough info to start digging deeper. Thanks to a lively discussion in the Conclave today with an invited guest to get us looking into this matter – which isn’t really what we are looking for, but this was staring at us! 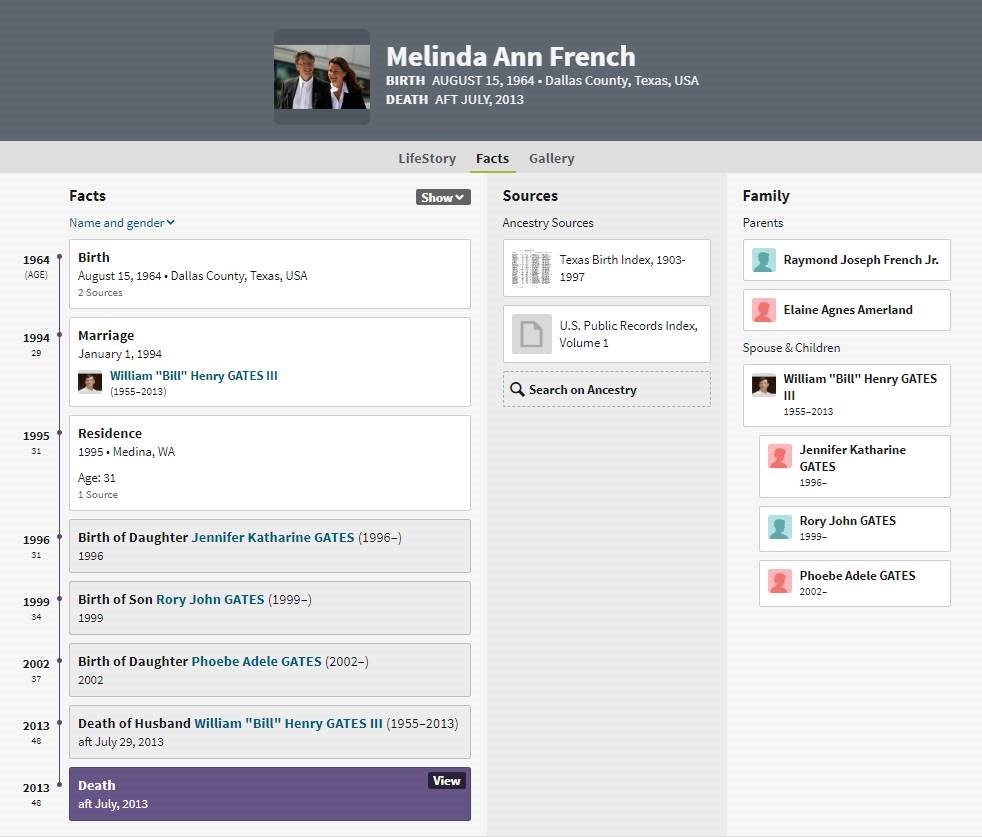 Click the link below to read what else we found out about Melinda Gates: 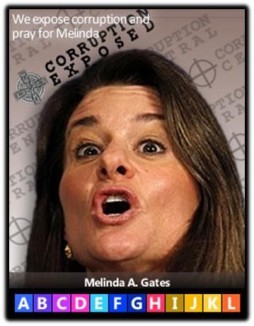 Melinda’s biographies across the web only tell us that her father Raymond was “an [Apollo] aerospace engineer, and her mother Elaine Agnes Amerland was a housewife.”

We can find no other background on Raymond French. Given Bill & Melinda Gates’ prominence in world healthcare, technology and politics, not to mention their commitment to depopulation, her silence about her father is suspicious. He was a contemporary of Robert I. Lieber, indicted Harvard nano-scientist Charles M. Lieber’s father who was also involved in radar, satellite and missile engineering for RCA/NBC and David Sarnoff.

Please only send links that contain additional data about Raymond, we have the many links to the scant information above. https://truthbits.blog/contact/

Some notes on Bill Gates. We are not drawing conclusions here, just pointing out some interesting time lines and videos for your consideration. We are CROWDSOURCING the truth about Bill and Melinda Gates and welcome your findings in the comment area below. 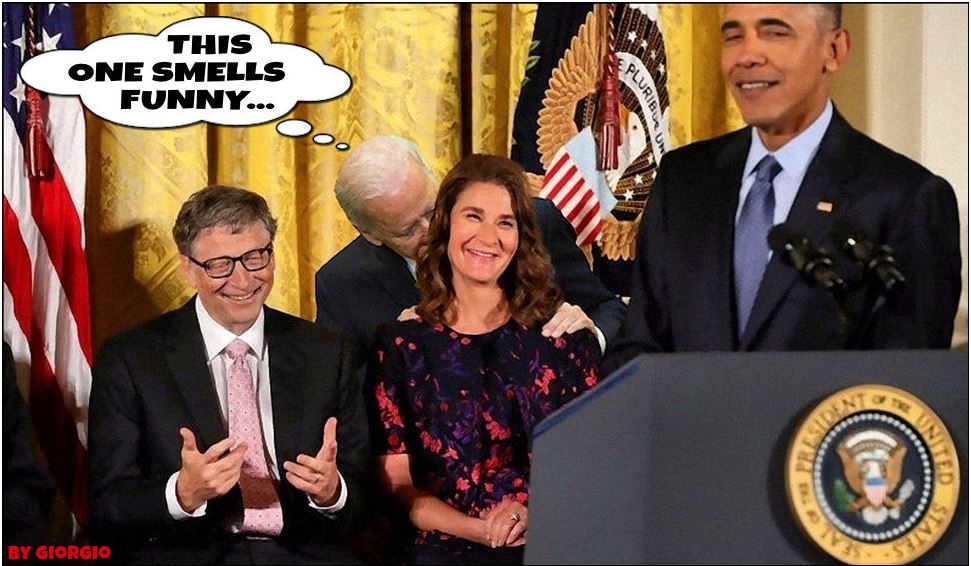 Perhaps this was the date of death on the certificate that was issued after Bill had gone missing for 7 years, after which he was pronounced dead. So we went back to July 29, 2005 and searched what was going on with Microsoft and Bill Gates at that time. This video (below) came up with a message in the description box:

“A presentation believed to have been made 2005/6 to DOD officials by a ‘scientist’ looking a bit like Bill Gates(!), claiming that research is being done to create a ‘vaccine’ that alters ‘Religious Fundamentalist’ behavior.”

The lecturer in the video, claims the person who posted this on YouTube in 2011, is not Bill Gates, but his gestures, stature, voice, etc. surely resemble the Bill Gates persona that appears in today’s media. Could this man be a double for Gates, stepping in for Bill when needed… then becoming a permanent replacement for Bill when he disappeared? Did the original Melinda also disappear in 2005? If you find any videos of Melinda prior to 2005, please post them below.

If you have comments, information, links that are relevant, please leave in comment box or send directly to us.

To compare the men, here is Bill Gates on Tuesday, November 15th at the keynote speech. This date would be seven before his Ancestry.com recorded death date of July 29, 2013. Notice the similarities of this Bill Gates to the one pictured in the DoD presentation?

This is Bill in 2004, prior to the Ancestry.com death date:

What else was going on with Bill in 2005 that is noteworthy? Here we have Bill receiving his honorary knighthood from the Queen Elizabeth.

“Gates said he was proud of what he called Microsoft’s “special relationship” with Britain.” 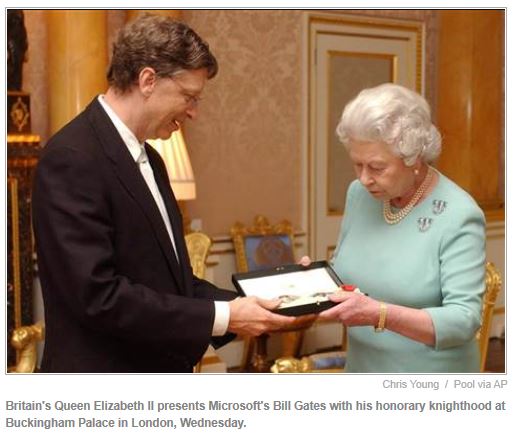 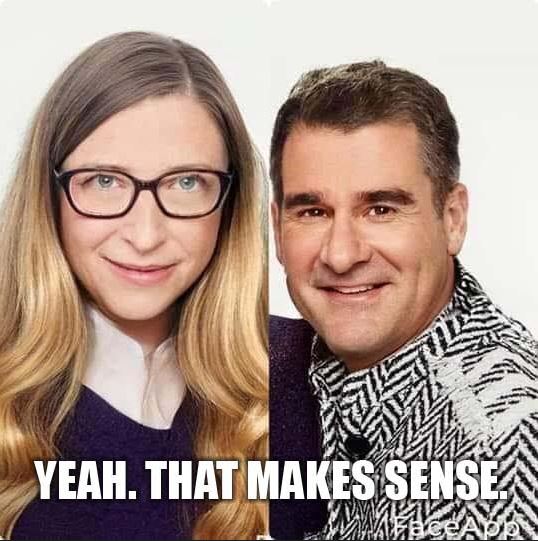 A while back, we busted the Corbett Report as a propaganda site; hence we do not post his material without an explanation. (See this article on Corbett.) Apparently the Bill Gates video we posted the other day is creating quite a stir in the internet world.

Why would James Corbett be freaking out about this? We agree with James that the man pictured is NOT Bill Gates, but have questioned whether it could be a Bill Gates proxy “practicing” his role. We found it odd that Ancestry.com listed Bill and Melinda as deceased in 2013. We wondered if this person who looks like Bill Gates, but is not, could be the Bill Gates that we have seen in the news since 2005?

Others are looking at what the lecture topic is about and think James is trying to distract you from what is going on in the lecture. Listen for yourself. Later B & T will be giving you an audio analysis.

This video is the expression of one patriot about the Gates. Take what you need from it, or not.

TRANSVESTIGATION: Bill Gates is a WOMAN.

These are not the same people. Similar but different. We realize that plastic surgery can be used, but why would you ADD a bump or acne scar that was not there previously?

Bill has no teeth in this picture: