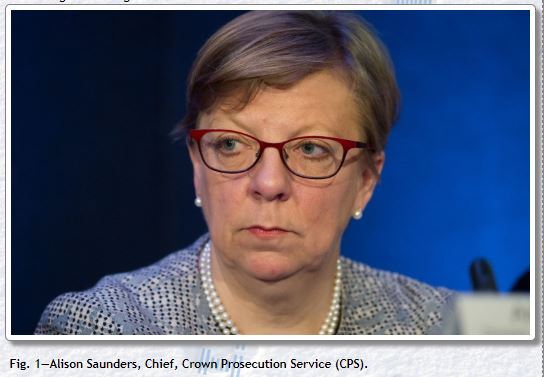 (MAR. 21, 2019)—Following a month-long investigation—aided by a Judicial Watch Mar. 7, 2019  release of more stonewalled DOJ FOIA releases—the long held suspicions of many that British Privy Council intelligence, technology and banking interests are behind the attempted coup d’état of President Donald J. Trump can now be confirmed, in our minds anyway, beyond doubt.

What moved our thinking from circumstantial evidence to fact?

“Dinner with the Ohrs” —A secret Jun. 05, 2016 dinner meeting between Alison Sanders and her entourage at the home of Bruce and Nellie Ohr’s in McLean, VA on .

That was just four days before the infamous Trump Tower meeting.

WHO IS ALISON SANDERS?

She is a British barrister (lawyer) who at the time of the Ohr dinner was the Director of Public Prosecutions (DPP) for the Crown Prosecution Service (CCP). In short, she was the Queen’s top prosecutor. She held a roughly equivalent post to U.S. deputy attorney general Sally Yates—Bruce Ohr’s boss.

On the surface, one might think that such contacts are not uncommon. After all, lawyers and law enforcement officials the world over compare notes. So what was different about this meeting?

A closer look at Saunder’s past and her conflicting relationships shows that she was on a secret mission by her Privy Council handlers to stop Donald Trump. The “Why?” will become obvious as this evidence unfolds.

WHY WAS SANDERS MEETING A JUNIOR OFFICER (OHR) INSTEAD OF SALLY YATES, OHR’S BOSS

The circumstances of “Dinner with the Ohrs” were suspicious on their face.

As Judicial Watch just uncovered, the Ohrs started planning this dinner party with Alison Saunders a month earlier, on or about May 06, 2016. Anecdotally, Peter Strzok refused all House questions about the activities of this May-Jun 2016 time period. He even said that his reason was to protect a “very sensitive source.”

At least six people dined at the Ohrs: Alison Saunders, her executive assistant, Helen Kershaw, Sue Patten and Patrick Steves, Bruce Ohr and Nellie Ohr. Saunders also had MI-6 security with her. We do not yet know who attended on the American side besides the Ohrs.

From a protocol perspective, this meeting was a non-starter. First, Saunders was meeting with an underling of her professional equivalent, Sally Yates. Second, being there under diplomatic immunity begs the question:

What did Saunders bring with her to give to the Ohrs? McVities, tea, crumpets, money, non-traceable gems, documents, weapons, drugs, what? Both Saunders and Ohr were international organized crime experts, so they would certainly know the opportunities that such a secret meeting provided. It appears that they were engaging in their own organized crime this time.

So, thanks to Judicial Watch, we have proof that American Bruce Ohr, one of the DOJ’s paymasters for Obama’s stay behind 10,000-man army innocuously named the Senior Executive Service (SES) Performance Review Board, is having a secret meeting with the Queen’s top Crown prosecutor.

It makes sense. Saunders’ American assets, the Ohrs, Strzoks, Comey, Mueller, Lynch, Page, McCabe, etc. were committing treason, and the Privy Council was anxious to make sure they would execute on the plan to frame the Trump campaign with their phony Steel “dirty dossier.”

Before we draw any conclusions regarding this suspicious timing, we need to review Alison Saunders’ background.

AIM Patriot Jim sent us this note to further elucidate the ‘Dinner with the Ohrs’ theme. Jim writes:

This same dinner occurred on September 1, 1933 at the nome of Alice Barrows, and employee of the Department of Education. The home was located in a Virginia suburb of Washington, D.c. In attendance were: Rober Breuere, a member of hte New Deal Textile code Advisory Board and a WWI supporter of the revolutionary IWW movement; David Cushman Coyle, and employee off the Public Works Administration(PWA ); Lurence Todd, Washington representative of the Soviet news agence, TASS, and a former official of the American Civil Liberties Union; Hildegarde Kneeland, and employee of the Department of Agriculture, amember of the ACLU, and the person Dr. Wirt claimed did most of the talking about the communist plans to take over the New Deal; and Mary Taylor, also an employee of the department of Agriculture.”

If each of these names were to be researched and traced to the origin, one Harry Hoppman, the first U.N. representative and controller of the flow technology and arms, including ‘yellow cake’ through Alaska, whose purpose was to ‘balance’ the planned cold war between ‘Soviet Union’, ‘Communist China’, and ‘America’…with enormous profits for the same ‘globalists’. The same agenda, the same purpose, the same ‘British Crown’.

One thought on “BRITISH-AMERICAN ESPIONAGE-TREASON”